A few days ago I finished the preliminary COLLADA based Model implementation in XNA which is the foundation of my bachelor thesis. Due to limited time I could only implement the skinning on the CPU side, but hardware skinning will be implemented afterwards, when I’m done with the writing of my thesis.

So I got skinned mesh animation working after a few hours of bug tracing. At some point I read the vertex weights reverted from the vertex stream (WZYX  rather than XYZW) which produced some weird results. Unfortunately I was searching for the bug in the wrong place for most of the time, since I thought I had read the skin information wrongly. But eventually I found the bug as mentioned above in the animator class itself where the weights simply were read in the wrong order.

So, even though there is really nothing special to show, I’m uploading a small video as proof anyway. ^_^ The model I used was already rigged but not animated. That’s why the animation in the video is so bad, in case you wonder.

Anyway, now it works. However, it’s not easy to find free animated models, apparently. For testing purposes I used, among others, again the model from Gears of War. Unfortunately I will probably not be able to use it officially in line with my bachelor thesis due to legal issues (unless I get permission from Epic Games). I spend this morning searching for good freely available and already animated models but had no luck so far.

After my fruitless search I quickly implemented opacity maps, though not very sophisticated. I’m not handling it like it should be handled, i.e. considering the drawing order from back to front etc., but as it is implemented now it will suffice for the most simple use cases. The following screenshot shows a COLLADA  model I downloaded from Google’s 3D Warehouse that was created in SketchUp for Google Earth, which is using opacity maps for fences and statues on the roof: 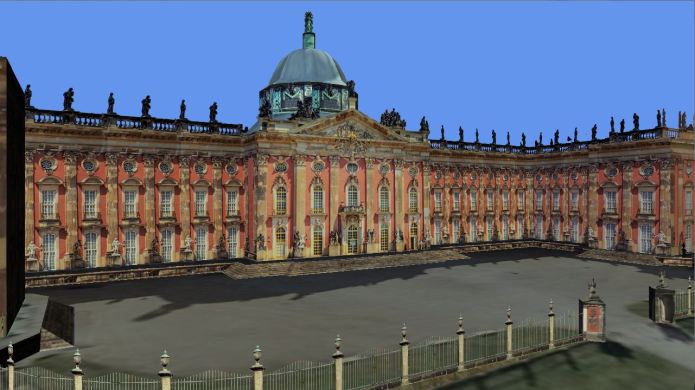 For the next days I won’t be implementing too many new things, since I’m primarily occupied with writing the actual text of the thesis. This will take hopefully not much longer than the next two weeks.

One day this week I wanted to do something different and decided to resurrect an old little project called any-good.com. It’s just a simple review website and I could use […]

This is a crosspost from my new blog over at http://goldsaucer.co.uk/tidal-music-app-for-linux/ So recently I’ve started testing Tidal instead of Spotify. I actually like it better than Spotify so far, however […]
Tidal Music app for Linux

Simplest way to hot reload your React Components with RequireJS

I started a new blog with my brother over at […]

So here’s just a quick one. Since these days pixelated […]
Easily Create Retro Pixelated Graphics for WebGL Browser Games

Today I decided to play around with Ruby a bit again. The latest version being 2.1.2, official installers were only available up to 2.0. I know it’s only one minor […]

Sometimes I have trouble focussing on a single project. I then justify my behaviour with stuff like “Der Weg ist das Ziel” (the way is the goal). I just like […]

I started working on a small WebGL based Tycoon-game with 2D isometric graphics. The game is about managing a growing group of people in a post-apocalyptic cityscape to ensure their […]
“Survival Tycoon”

Today I decided I want to continue learning the programming language Go and write a small OpenGL program with it. For OpenGL I wanted to use the Go package “github.com/go-gl/gl” […]
%d bloggers like this: